As a result of several destructive fires within Glen Rock Prior to 1888, town council purchased a used 1849 Rumsey hand drawn pumper. This apparatus operated by four firefighter on each side pumping the wood handles which forced the water through the fire hose by the hand powered piston pumps. Water for the engine was drafted from cisterns, wells, the millrace, Codorus Creek and or the millpond. By 1901, Glen Rock had its first water mains and fire hydrants to enhance fire protection.

On October 1st , 1901, the Glen Rock Borough Council issued a call for a public meeting to organize a fire company. President of town council, S.K.Diehl, requested a temporary fire organization, which was granted volunteer firefighter for the new company. Forty five men initially volunteered. The following were elected to office of the company : president, Allen M Seitz; I. Palmer Diehl, Secretary; Isaiah Young, Treasure. The following were appointed by President Seitz to draft a a constitution and by-laws: E.S. Hiteshue, M.L.Kapp and Edward Slonaker. 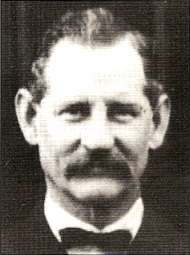 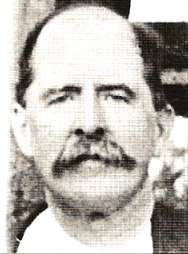 October 11th, 1901, the company held their 3rd meeting within the month to get organized properly. Membership fees were set at $I .00 per member annually. Copies of the company constitution and by-laws were distributed to members. The Fire Company contacted the Glen Rock town council and urged them to locate a meeting place for the company.

Note: The Rumsey hand pumper was named "Old Mark" in honor of Mark Rackliffe who at the time was Glen Rock's chief Burgess. Mr. Radcliffe came to Glen Rock about 1849 from England and was not only one of the four original community leaders but a rope manufacturer as well.

The Foust building on Baltimore Street was secured for the fire company to station "Old Mark" and at the same time allow the public to view the hand pumper through a large plate-glass window in front of the building. Today the antiquated "Old Mark" can still be seen proudly displayed In the special museum room at the front of the new fire station addition. "Old Mark" was saved and reconditioned by ambitious members of the fire company who felt the old pumper represented a vital part of out fire company's history, The Beginning"!

In late 1901 or early 1902 it was decided by the fire company to purchase a hose carriage from the Goodwill Fire Company of York, Pa. This carriage cost $100 and was transported free of charge to Glen Rock via The Northern Central Railroad. The hose was originally carried to the fire scene by the firefighters. 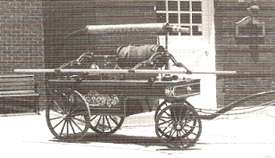 Pictured is Mark Radcliffe, whom the 1849 Rumsey Hand Pumper was named. 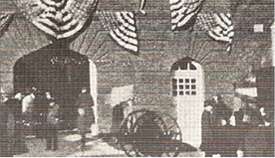 June 30. 1902- at 11 am, the fire-company responded to a fire in the kitchen of the Cold Spring Hotel on Main Street. The fire was extinguished with minimal damage.

July 11th, 1902- The Glen Rock Hose and Ladder Co. took on the duties of sprinkling the dusty dirt streets of Glen Rock. The payment to the fire company for the July, 1902 street sprinkling was $39.55. It is not sure if Glen Rock Borough Council, or community businesses paid for the sprinkling. Sprinkling profits for August. 1902, were $49.45. The fire company also sponsored a lawn festival, which profited $177.10. These profits were used to purchase firefighting equipment.

November 1902- Chairman E.S. Hiteshue. of the Fair and Festival committee reported a profit of $852.25 from the festival. Thanks to the generosity and support of the citizens of Glen Rock, town businesses, a group of ladies who volunteered working at the fair, the Glen Rock orchestra, and the Glen Rock Band, the Thanksgiving Festival was very successful and Rave the fire company a big financial boost.

In January 1903. President A.M. Seitz reported having made application for a charter for the fire company.

At the same time a committee was appointed to secure a plot of ground on which to build the fire station. This was obtained from W.C. Lau for the sum of $650. The plot was located beside the Glen Rock steam bakery on Hanover Street.

February 25, 1903- The company is called to a fire at the Norrish Foundry and machine company which destroyed the Cupola and some of the roof before being brought under control, damage amounted to $1,000.00.

On March 13th ,1903 the Glen Rock Hose & Ladder Company received it's charter but it was originally issued on January I9th,1903 from Judge John Bittenger, for the court. There are 48 original charter members of which M. Guy Lentz served as a member of the fire company for 78 years until passing away on October 21st, 1979.

At the same time that the charter details were being worked out, the company also began planning the construction of an engine house. In March 1903 plans for the building were discussed with the architect, Joseph Dise. In July 1903 the building plans and sketches presented by architect J. Dise were examined and accepted by the fire company members.

The Standard Screen Works, Wm. Frey and I. Gladfelter donated building stone for the new engine house. $50 was donated towards the building by the Junior Athletics from a fund raising event. Citizens also donated money to purchase bricks for the fire hall. Interest grew as the new engine house continued to rise with members joining the fire-company monthly. 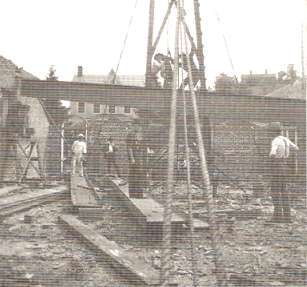 Fire fighting equipment was badly needed so the borough council purchased hose for the fire-company periodically. The engine house was completed December 9, 1904 at a cost of $8.008.23 plus $650 for the plot of ground. The new engine house has been utilized for many things besides housing fire apparatus and company meetings such as borough council meetings, boy scouts and a host of other organizations. The engine house was also used for voting, tax collection drop off, various fund raising fairs, festivals, etc.! There was even a library on the 2nd floor and a basketball court on the 3rd floor, the electric theater, a practice hall for the Glen Rock Caroler's association and the list goes on and on! 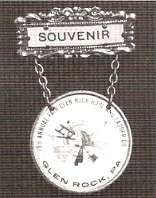 Souvenir from the 7th annual fire company fair and festival held in November, 1907. 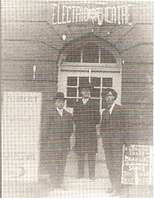 Entrance to the Electric Theater located in front of the Glen Rock Fire Hall. Admission was only five cents. 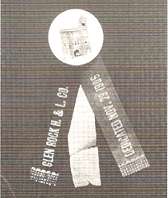 Souvenir ribbon from the dedication of the Fire House on November 29th, 1906.

Crowd gathered in front of the Glen Rock Fire Hall and Steam Bakery during a community ox roast in 1910.

Loss of A Great Volunteer

October 12th, 1918- While fighting a house fire at 155 Hanover Street, in Glen Rock, firefighter Harry Stover, who was a charter member and instrumental in the growth of the fire company became extremely ill, suffering from flu and pneumonia, which eventually took his life on October 22nd, 1918. Fire chief Roy Heyn filed a report that he felt that Stover died as a result of fighting the fire. During that time there were many deaths and serious illness due to a flu/pneumonia epidemic . It is not certain if fighting the fire could have contributed to firefighter Stover's illness and death. 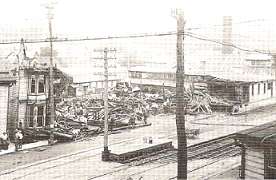 J.F & H.O. Neuhaus and Read Machinery Company after a fire on july 1st, 1921. View is from Geiple's Hill looking across Main Street 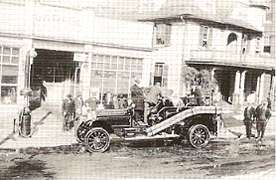 Hot Time In The Old Town

July 1st, 1921 was regarded as the darkest day in the history of the fire company up to that time. A fire broke out in the Read Machinery Company and quickly spread to the neighboring building of J.F. & H.O. Neuhaus Hardware and Farm Machinery Company on Main Street, Glen Rock, destroying both buildings with the loss of $200,000. Handicapped by the absence of modem fire fighting equipment the hand-drawn fire apparatus was no match for this fire. Glen Rock firefighters could only protect nearby properties while in constant danger from exploding fireworks and dynamite going off in the Neuhaus Building. Firechief Roy Heyn requested assistance from the York City Fire Department. Laurel Fire Company of York sent it's more modem engine to assist Glen Rock. The Laurel engine drafted water from the old mill race and assisted in containing the fire. 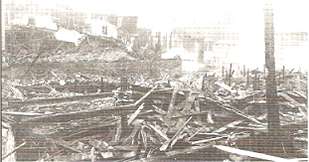 Another view of the J.F & H.O. Neuhaus and Read Machinery Company after a fire on july 1st, 1921. The Glen Rock Fire Hall can be seen in the distance.

October 28th, 1921- A special meeting was called by fire company president S.D. Wareheim to decide what type of new and more efficient fire apparatus to purchase. After examining the merits White, Ahrens Fox and American La France Fire Apparatus the members of the Glen Rock Hose and Ladder Company voted to purchase a 750 gallon per minute American La France pumper. The new engine was delivered on March 1st, 1922 and was Glen Rock Hose and Ladder Company's first motorized fire apparatus. Payment for the engine was made on April 22nd, 1922 at a cost of $12,500. This engine would eventually be nicknamed "Old Grandma." The following members were appointed by company president S.D. Wareheim to have charge of and maintain the new engine: Harry Foust, Furhman Hershner. Kenneth Keller, T.M. Brown, Dan K. Krebs, and Roy M. Heyn. At this point the old Goodwill hose carriage was retired from service. On March 22nd, 1922, the housing ceremony was held at the Glen Rock Hose and Ladder Company for the new American La France engine.

1925-At this point, the new American La France engine had responded to numerous fire calls out of town since it's purchase. There were only three fire calls for the year of 1925.

1926-The company meeting room, commonly known as "the parlor", was finally furnished and complete, providing a suitable room for meetings and other company business. The cost was $1,222.01. By the end of 1926, a committee was appointed to look into the purchase and installation of a siren on top of the fire house to alert volunteers for fire calls.

The Glen Rock Fire Hall is decorated for the dedication of the 1922 American La France engine.

A crowd gathered in front of The Glen Rock Fire Hall for the engine dedication, March 22nd, 1922.

February 27th, 1927- Glen Rock Hose and Ladder Co. responds to a fire in the kitchen of Hotel Glen resulting in several hundred dollars in damage.

August 8th, 1930- A committee was formed to gather information on an official fire company dress/parade uniform. It would be 20 more years until an official uniform was adopted.

November 13th, 1930- A committee was appointed to investigate mounting of the company's 2-chemical tanks of the hand drawn chemical carts on a motorized chassis. This idea never materialized.

April 10th, 1931- The first breathing apparatus for firefighting is purchased. It is unknown what type of respiratory protection it was, other than it was reported in the records as (4) respirators were purchased.

December 1934- The fire house was used as a distribution center for the York County Relief Authority to hand out supplies to the needy.